PhD Researcher, The University of Dundee

“They are not at the table and the microphone….” Jens Nymand Christensen (2016)

Three speakers, were asked, respectively, to address this theme in a short 15-minute lecture. Two of these – Jens Nymand Christensen, Deputy Director General of Education and Culture in the European Commission and Rose Fenton, former Director of Free Word – I did not know at all, although I have been a subscriber for some years to the Free Word newsletter. The third, Prof. Richard Demarco, I have known for most of my life, and am currently working on a PhD, related to his voluminous archive and its enormous cultural and educational legacy. There was clearly an imbalance in my experience and understanding of the respective speakers’ roles, perspectives, and areas of interest. But I eagerly awaited the discourse which would follow.

Earlier in the day, I had an opportunity to meet with all of the speakers and to share their views and conversations over lunch. We were also joined by Katerina Yiannibas, who described the European Dialogues project as her ‘baby’. It is an apt expression because Katerina has nurtured her precious intellectual off-spring with care, love and diligence. I was impressed by Katerina (Professor of International Public and Private Law at the University of Deusto, San Sebastian), her intelligence and her vision. Katerina, who had worked as a lawyer in New York but left after the financial crash of 2008, established the European Dialogues as a way of bringing such ‘private’ conversations held by lawyers, academics and bureaucrats into the public sphere. Katerina, who has always known the value the arts, in their broadest sense, determined that such dialogues take place in ‘cultural spaces’.

It was fitting for many reasons that the event on 15 December, 2016 should take place in the recently opened San Telmo Museum, which is dedicated to a celebration of Basque culture and ethnography and also has a rolling programme of visual art exhibitions.

The Tree of Liberty

The museum is an extension to and an adaption of a 16th Dominican convent and church, dedicated to Saint Elmo, the patron saint of Sailors. Within the church, now deconsecrated, are a famous series of paintings by Josep Maria Sert (1974-1945) illustrating scenes from the history of the Basque people including the lives of the sailors and fishermen on whose labour the city of San Sebastian – Donostia was built. The 11 canvases were unveiled at the opening ceremony of the museum on 3rd September, 1932. One of them, under the title, A People of Freedom, depicts the oak tree of Gernika (Gernikako Arbola) ­­– above, a female figure, breaking free from her chain, strides skywards against a radiant sun, while below, an open book seems to symbolise the written law, in which is enshrined the freedom of the people. This did, indeed, feel like an appropriate and auspicious setting for dialogues on the future course of Europe.

I thought of the Tree of Liberty and its symbolism in the American War of Independence, and much nearer to home, the poem attributed to Robert Burns, The Liberty Tree.

They are not at the table and the microphone

A number of themes emerged during the discussions which took place. One of these – perhaps the most important – was the idea that Europe must engage with the rest of the world, especially the emerging political, economic and cultural super-powers. Jens Nymand Christensen made the point, quite openly, frankly and bravely, that his understanding of Islam was limited, because of his background, ethnicity and education. He was far from proud of this. Such lack of knowledge is dangerous. It promotes a lack of understanding, suspicion, fear and makes it much easier to categorise Muslims as ‘other’. From here, it is a short step to defining holders of that faith (who number around 23% of the world’s population) as ‘the enemy’. With the tragic events in Berlin before Christmas, it is easy to see how such acts of senseless murder can be exploited by racists, bigots and those on the far right of politics for their own ends.

Rose Fenton had an upbeat assessment of some aspects post Brexit. London, like Scotland, voted by a large majority to remain in the European Union. The Major of London, Sadiq Kahn, has declared, Rose Fenton reminded us, that London is ‘open for business’ and cultural exchange and open to all.

Jens Nymand Christensen is an open an honest commentator and very different to the kind of Eurocrat that I had expected. When we conversed, he looked me in the eye. When he spoke, his openness was refreshing – almost the opposite of the bland political statements which often characterize EU – based discourse.

Christensen recalled the kind of scenes which we had almost become accustomed to during 2016 – the site of columns of de-draggled and disoriented refugees walking along motorways and roads, embarking and disembarking from trains, making their way across muddied fields and woodlands. Such scenes had not been witnessed in Europe for two generations. Perhaps we have already forgotten them as the world has turned its attention to Brexit and Trump, in what the Scottish journalist and historian, Neal Ascherson, has described as the ‘episodic consciousness’?

Christensen also pointed to the question of youth unemployment and the fact that the Basque country has one of the highest rates in Europe. Certainly, speaking to younger members of the audience later I was struck by dissonance between the beautiful, cultured surroundings and the hidden pain and difficulty lying just below the city’s veneer. “They are not at the table and the microphone…”, he noted.

This event was well-attended and the audience had a wide age range. But I was disappointed by the audience’s lack of engagement and the way the panel’s views were unchallenged or debated. Speaking to a young student afterwards, I was interested to hear that she had several points of disagreement with the panel but was too intimidated to respond, if her voice was perceived as dissenting.

How do we measure the value of such an event? Everyone disperses and continues with life, often a struggle in which it is easy to forget global, supra-national issues when so much time and energy is taken up with the basic practicalities.

Like most people, I suspect, I am bombarded with information and images on a daily basis. How to filter out the inconsequential from what is important? What is fact and what is fiction in a world of ‘post-truth’ and ‘alternative fact’?

Only connect! That was the whole of her sermon. Only connect the prose and the passion, and both will be exalted, and human love will be seen at its height. Live in fragments no longer. Only connect and the beast and the monk, robbed of the isolation that is life to either, will die…

It is a somewhat puzzling fragment, spoken internally by one of the characters, Margaret, in relation to another, Mr Wilcox, (‘It was hard going in the roads of Mr Wilcox’s soul’ she says in the preceding paragraphs). The context is Wilcox’s disassociation of the spiritual and the carnal, God and Sex, the perpetual dichotomy. In Demarco’s mind the context and the association is different, wider, infinite. It might be Demarco’s epitaph and a fitting one at that, along with its closely associated maxim, which he also refers to frequently ‘Art originates in the meeting of friends and in their shared dreams and ideals’. The sentence is attributed to the English painter, Cecil Collins, a friend of the stained glass artist, Patrick Reytiens, with whom Demarco collaborated on numerous occasions, but principally in relation to Demarco’s experimental artistic-pedagogical experiment, Edinburgh Arts.

Perhaps here in this church under a clear and gentle winter sky, I felt the spirit of these words, as a tri-lingual event unfolded. In the technologic spirit of the times the artist Pernan Goñi created a visual narrative, in ‘real time’, which interpreted the words of the speakers. A one stage he uploaded an image to his Twitter feed showing hands of all shades and sizes joining together under the words ‘Let’s connect’. He sent the message to me. And we did. 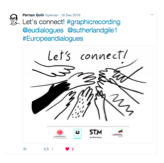 Another of Pernan’s images emerged behind Demarco as he discussed the perils of a divided Europe, citing the tragedy of the Spanish Civil War and the bombing of the Gernika-Lumo (Guernica) a town but 50 kilometres from where we sat. It was of course impossible not to think of Picasso’s most famous work Guernica, which so perfectly captured the contemporaneous mood of international outrage. One of several incarnations of the Gernika oak was put under armed guard shortly after the bombing to protect it from Francoist troops who wanted to fell this important symbol of Basque identity.

Demarco had a heavy cold, yet, despite this, he remained impassioned and convincing. I glanced along the seated row of guests….and caught Katerina’s expression, one of   attention and admiration. It was a deserved response.

Strange, to see you standing

against a background of gravestones

with a heavy history.

Forms walking out of darkness,

carved so many lives, and deaths.

Marking a rhythm that ends here.

into this cloistered space,

bending the universe around you.

How many souls have walked here,

Elmo have them sanctuary,

and hill, gazed down on

They stood in the same space

Anger in your voice.

Passion in your eyes.

surging through the river mouth.

Raw energy pushing into the city.

I heard your voice,

I read your eyes,

One moment in time

A billion moments in each day.

This one for you.

E-dialogues: The internet will make us freer … or not